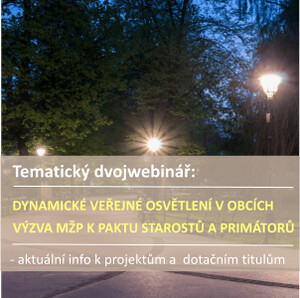 Two energy webinars took place on 9 January 2019 in partnership with Czech Healthy Cities and SEMMO (Association of Energy Managers of Towns and Cities) – the recordings of both webinars (in Czech) can be viewed any time.

The first webinar focused primarily on MUNICIPAL PUBLIC LIGHTING. The second webinar provided information of the Czech Ministry of the Environment regarding the forthcoming CALLS for subsidies of the Covenant of Mayors for Climate and Energy and introduced the Association of Cities and Towns´ Energy Managers. The webinars can be watched in Czech language on the YouTube channel of Healthy Cities of the Czech Republic, the recorded versions including presentations and other attachments can be found HERE.

The webinars were co-hosted by the National Network of Healthy Cities in partnership with SEMMO, with the support of Energy Cities/ and the European Covenant of Mayors for Climate & Energy.