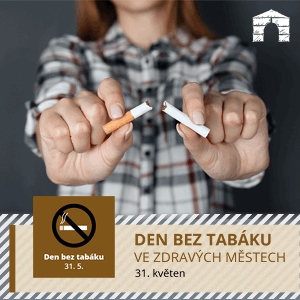 The World No Tobacco Day campaign took place on 31 May

The World No Tobacco Day is an international campaign aimed at preventing tobacco-related diseases. The campaign is celebrated annually on 31 May. It is supported by the World Health Organization (WHO) and joined actively by a number of Czech Healthy Cities members. The use of tobacco products is still one of the leading causes of deaths both in the European Region and worldwide.

The focus of the World No Tobacco Day 2019 was on the impact of tobacco on the lung health of people from all over the world. The aim of this year´s campaign called “Tobacco and Healthy Lungs” is to raise awareness on:
- fundamental role the lungs play for the health and well-being of all people;
- risks posed by tobacco smoking and second-hand smoke exposure (i. e. passive smoking);
- negative impact of tobacco on human lung health, from cancer to chronic respiratory diseases;
- emergence of evidence on the link between tobacco smoking and tuberculosis deaths;
- actions and measures that key target groups, including the public and governments, can take to reduce the risks to lung health posed by tobacco;
- magnitude of deaths and illness globally from lung diseases caused by tobacco, including chronic respiratory diseases and lung cancer.

On the occasion of the World No Tobacco Day, a series of anti-smoking awareness events are held annually in the Czech Republic. In addition to the WHO support, the campaign is also supported by the National Institute of Public Health (for more info, see www.szu.cz). Furthermore, Healthy Cities, Towns and Regions hold a number of events such as the “Paths to Clean Air”, contests and theatre performances with anti-smoking themes for children, and lectures and health advice for adults.

The overview of activities of Healthy Cities, Towns and Regions concerning the World No Tobacco Day can be found on: www.ZdravaMesta.cz/dbt.