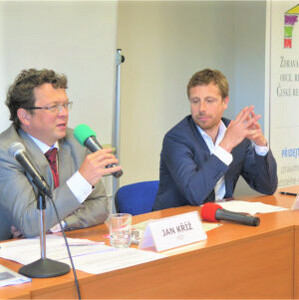 With the participation of more than a hundred interested parties from all over the Czech Republic, the nationwide Healthy Cities workshop, which took place on 13 May in Prague, drew attention to two highly topical issues that have a profound impact on the future appearance of the places in which we live. The first issue is the collaboration between cities and architects and the second is water management.

The ensuing session, focused on collaboration between cities and architects, was moderated by the architect Filip Tittl (Czech Technical University in Prague, UNIT architekti). He pointed out right in the beginning that the role of an architect could be more varied than usual in most cities. All speakers agreed that an urban architect is an important intermediary between a politician who will decide on a particular project and a planner who will implement it. The role of the urban architect should not be restricted only to a mere “overseer” watching over a zoning plan being respected. Conversely, it is highly desirable to involve them actively in the decision-making process on urban development issues (e.g. investment, territorial planning, upkeep of green areas etc.).

The speakers of this session also reflected on the role of an urban architect (Petr Lesek, Projektil architekti) and described concrete approaches and examples of collaboration with architects in the territory as illustrated by the examples of the city of Litomysl (Antonín Dokoupil, Department for Urban Development of Litomysl) and the small South Bohemian municipality of Usilne (Ondrej Synek, re:architektiy). The session was closed by a discussion between speakers and participants highlighting, among other things, the significance of the role that urban architects play in the issue of adaptation to climate change as initiators of concrete solutions.

The session devoted to water management was opened by the moderator – architect Vojtech Lekes (NEXT institute) who introduced a prototype of collecting rainwater installed in the centre of Brno as urban furniture. It is a simple example of how to efficiently collect water in a city and use it to water urban green spaces. Martin Vanecek (Environment Department of Brno) followed up with concrete examples of water management mentioning e. g. the park outlets in the form of drainage piping for irrigation, the use of water collected from tower blocks rooftops to fill up a retention basin in the park called “Park pod plachtami“, the preparation of revitalisation of the Svratka river, green tram tracks and the city´s incentive program to promote the creation of green roofs. Radim Vitek (Office of the Architect of the City of Brno and CzWA – the Czech Water Association) introduced possible approaches to managing rainwater – an investment approach (concrete projects) and an organisational approach (systemic measures). In particular, he stressed that this issue has a huge political potential requiring an interdisciplinary approach and a change of established practices. Cities still have a long way to go with this issue. This session was closed by Vendula Zahumenska (Investor Zahumny), a lawyer with a long-term professional experience in the area of urbanism and adaptation to climate change. She emphasized the legal aspect of the issue at hand and mentioned the importance of careful preparation of contracts with investors (especially the role of planning agreements) and the fundamental principles of the link between adaptation measures and both zoning plans and regulation plans.

This event was supported from the funds of the European Social Fund provided from the Operational Employment Programme to implement the project.