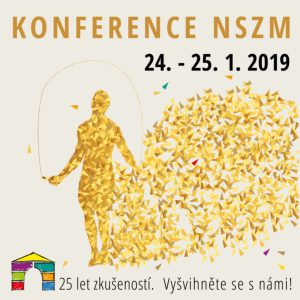 On 24 January 2019 the main part of the nationwide conference called “MAKE IT TO THE TOP!” with the headline “SUSTAINABLY AND HEALTHILY IN CITIES” took place in the Ambassador Hotel in Prague. The conference was held by the National Network of Healthy Cities of the Czech Republic and under the auspices of the First Deputy Prime Minister, the Minister of the Interior and the Minister for Regional Development. The event brought together not only the representatives of towns, cities and regions, but also the representatives of the Chamber of Deputies, the Senate, ministries, international institutions and organizations as well as universities.

The working section was opened by the representatives of three important ministries - Environment, Regional Development and Health. They expressed their appreciation for the cooperation with cities, towns and regions, and highlighted the role of their respective ministries. Furthermore, each of them emphasized, from their own perspective, key issues which significantly affect the quality of life in municipalities and regions. In the afternoon session, the participants were greeted by the Deputy Minister of the Interior and Srdan Matic, the director of the WHO Country Office of the Czech Republic.

The afternoon session focused on sharing good practices from everyday lives of cities and towns. The topics covered were: partnerships and public participation in general (City of ZNOJMO) as well as involvement of specific groups of citizens such as youth (City of DOBRIS), elderly (PRACHATICE) or entrepreneurs (ROZNOV p.Radh.), Fair Trade (TREBIC) or an example of partnerships in small towns (ZBYSLAVICE). In terms of strategies, issues such as management of local authorities (BRECLAV), climate protection and city greenery (OSTRAVA), health as a priority (VALASSKE MEZIRICI) were addressed. Other key issues included conservation of monuments and sights and urbanism (HAVLICKUV BROD), responsible behaviour of local authorities (TABOR) and promotion of cycling (NOVY JICIN). All the mentioned topics and issues are closely related to progress towards sustainable development. The above-stated cities, as well as other cities, towns and regions are actively involved in these initiatives, which bears fruit, among other things, in the procedure according to LA21.

Held in a beautiful setting the conference was followed by a festive award reception to acknowledge the cooperation with important partners of the association. “The Czech Healthy Cities Leapfrog 2018” awards were handed over and the results of the “Best Practice Contest 2018” were announced. The most qualified members – long-standing and successful “champions” of the association, who were able to participate, recounted stories from a 25-year-long history of Healthy Cities. During the moderated discussion, the representatives of Chrudim, Litomerice, Koprivnice, Hodonin, Vsetin, Krizanky and the Vysocina Region shared their experiences.