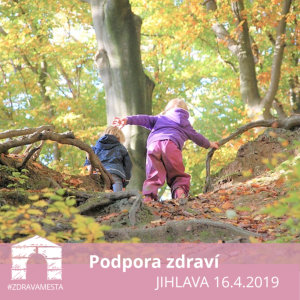 A new series of seminars on HEALTH in cities has been launched – this time about children´s obesity | Jihlava, April 2019

On 16 April 2019, Jihlava hosted an introductory event to a new series of seminars on health promotion in cities and towns. The event was organised by Czech Healthy Cities (HCCZ) in partnership with the National Institute of Public Health (department of Jihlava) and the Vysocina Healthy Region. The main theme this time was children´s obesity highlighting possibilities which cities, towns and regions have to prevent it, the steps they take in this area, and the help they can offer.

Representatives of regions and professional institutions, doctors and practitioners presented many interesting facts, reflections and inspiration. It is worth noting that the proportion of obese children is steadily increasing, and according to statistics regarding the Czech Republic, 9 percent of children are obese and 25 percent are overweight with 50 to 80 percent of children continuing obese into adulthood. The reason for this is not only a high calorie intake and an unsuitable dietary composition, but above all a lack of physical activity (the WHO recommends at least 60 minutes of physical activity daily, which is met only by a minimum of children), even though almost 70 percent of children attend a sports club.

The causes of this issue are largely influenced by the family, however, municipalities and regions can foster positive changes in numerous areas – e.g. suitable planning of space and services (thinking about ways of arranging space and services to make them accessible within walking or cycling distance), encouraging children to walk or cycle to school (“walking bus/bike bus“), active awareness-raising, campaigns, incentive programmes and financial support for appropriate measures. Apart from the family itself, schools and kindergarten, where municipalities can exert significant influence, also play a crucial role (accessibility of playgrounds and sports grounds, possibility of spending school break times actively, school meals and many others).

This event saw numerous interesting presentations delivered. The topics of conceptual health promotion and systemic approach of cities were addressed by the representatives of Healthy Cities of the Czech Republic and the National Health Promotion Network, as well as by the representatives of the Faculty of Physical Culture of the Palacky University Olomouc. Doctors and physiotherapists looked at the influence of lifestyle on the health of children – or the consequences of lack of physical activity for children´s body. The representatives of the Vysocina Region and the city of Jihlava presented concrete examples and inspiration from their practice.

All the presentations from the event can be downloaded HERE.

In the near future, we are preparing other themes such as the promotion of physical activity, planning in healthcare and social areas, mental health etc. The emphasis will invariably be placed mainly on the role of municipalities/regions and what they can actively influence or promote, how to conceptually plan, manage and fund given themes, and how Healthy Cities and their associations can be instrumental in this area.

The event was supported from the funds of the European Social Fund provided from the Operational Employment Programme to implement the project.